Over last week, I finally took the dive. I ordered some new supplies from mad Oils, and I absolutely love it! I received rosebuds, hibiscus petals, cornflower petals, and tea tree essential oil. They even included a little sample fragrance oil (It smells like Christmas in a bottle!) and a bit of sample mica. I've already used these in some soaps that you can see below!

So, first off we have my latest Amber handmade soap, scented with Amber fragrance oil from Bramble Berry, along with the cornflower petals from Mad Oils. Gorgeous! 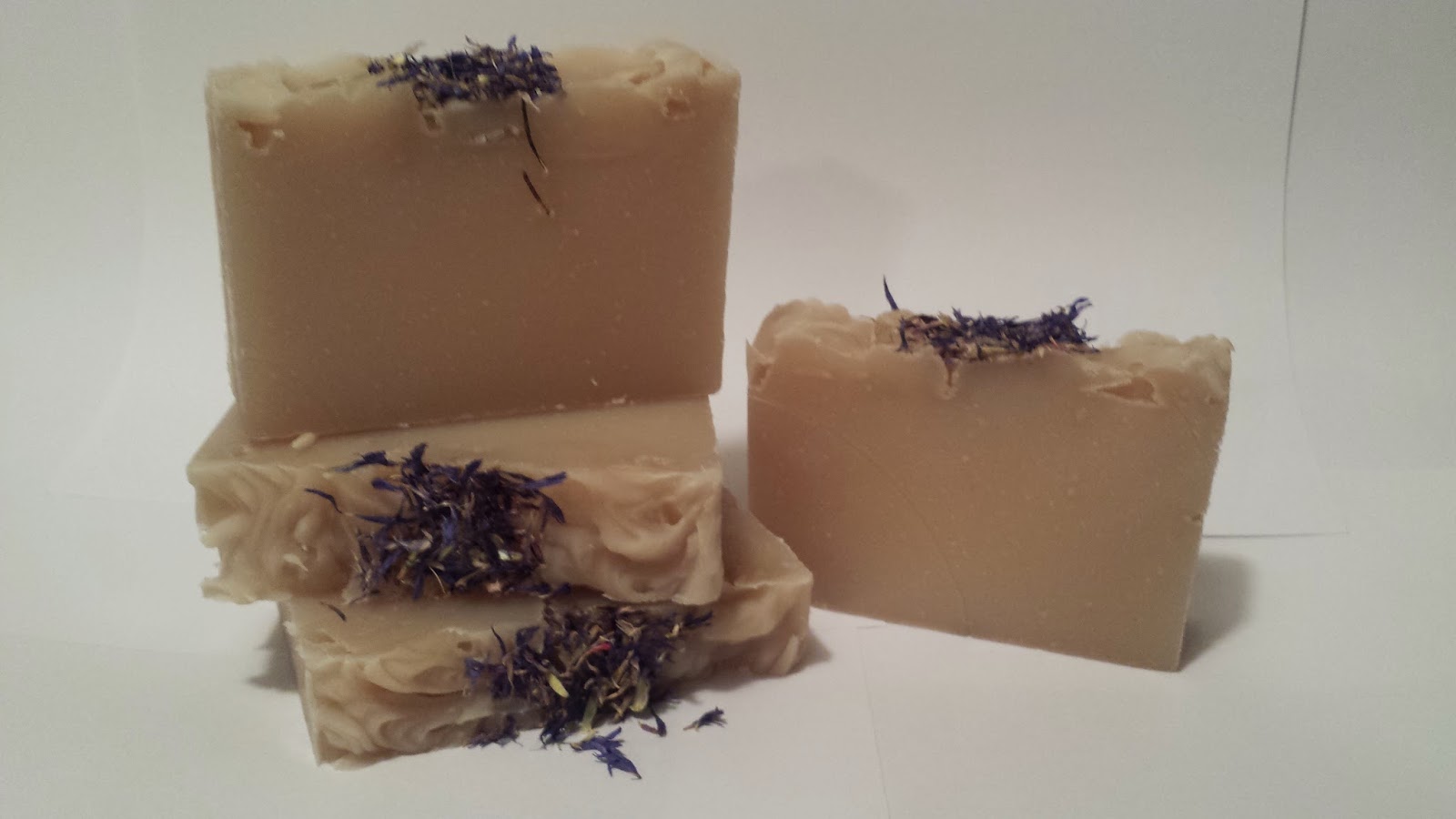 I also made a Neroli & Shea soap, scented with Neroli & Shea Blossom from bramble Berry (I have SO MUCH of this from the samples!) and decorated with hibiscus petals and rosebuds. I love how this one came out, nice and white, no discoloration, and no acceleration. Fantastic! 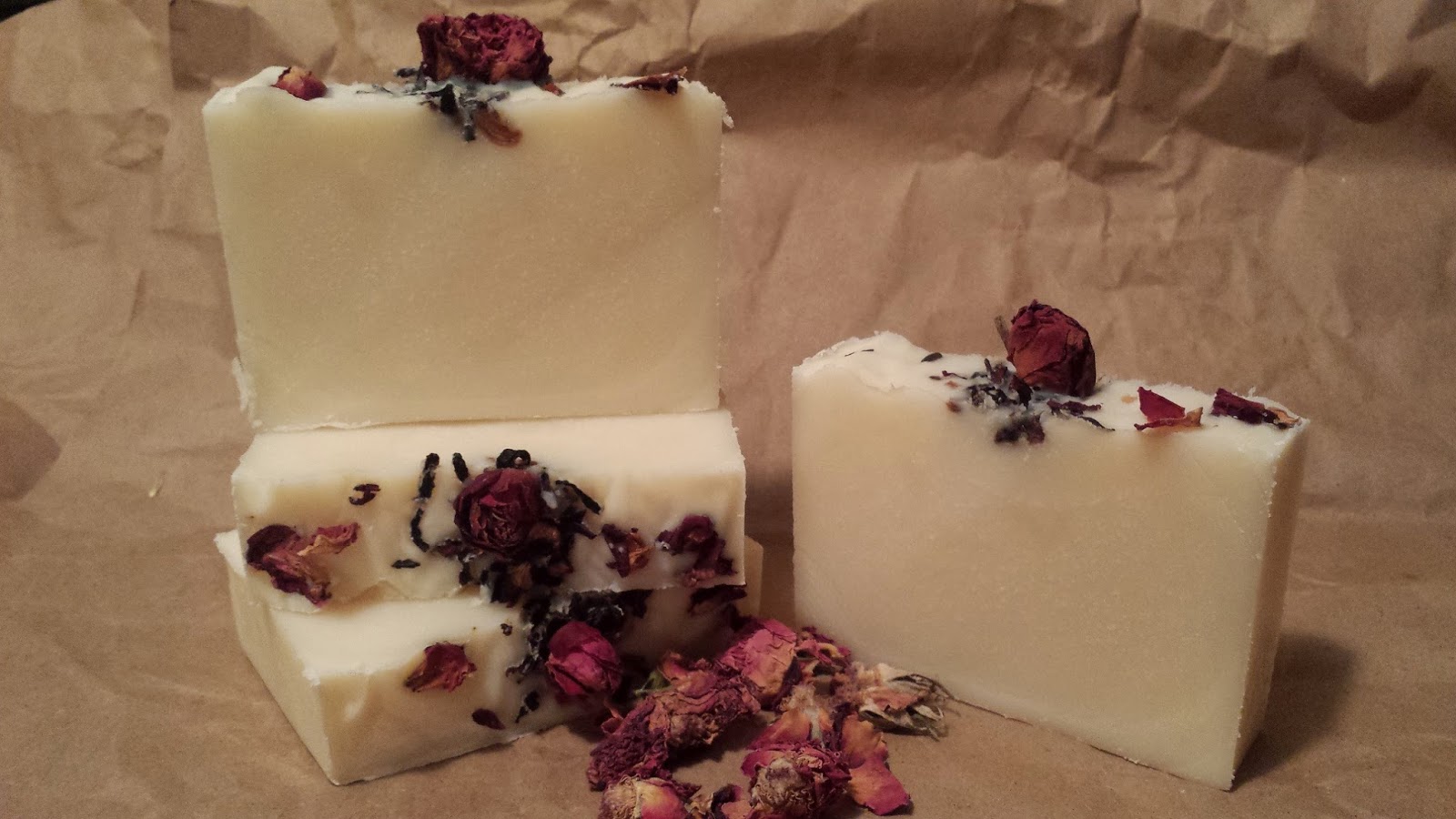 I also got around to redoing my Etsy store with all my latest soaps, and you can view them here.

I do plan on ordering a bunch of new exfoliants, and I need to restock my castor oil and palm kernel -- order one and run out of two more! Oy.

I also entered Kenna's (from Modern Soapmaking) contest for Gratitude Soapery. I'm very excited for the opportunity, and if chosen will consolidate my Unique Useables with Gratitude -- and have a little leg up in the world to get everything up and going. So many things!

So, my soapy fellows -- anyone tried anything new lately? Let me know in the comments! 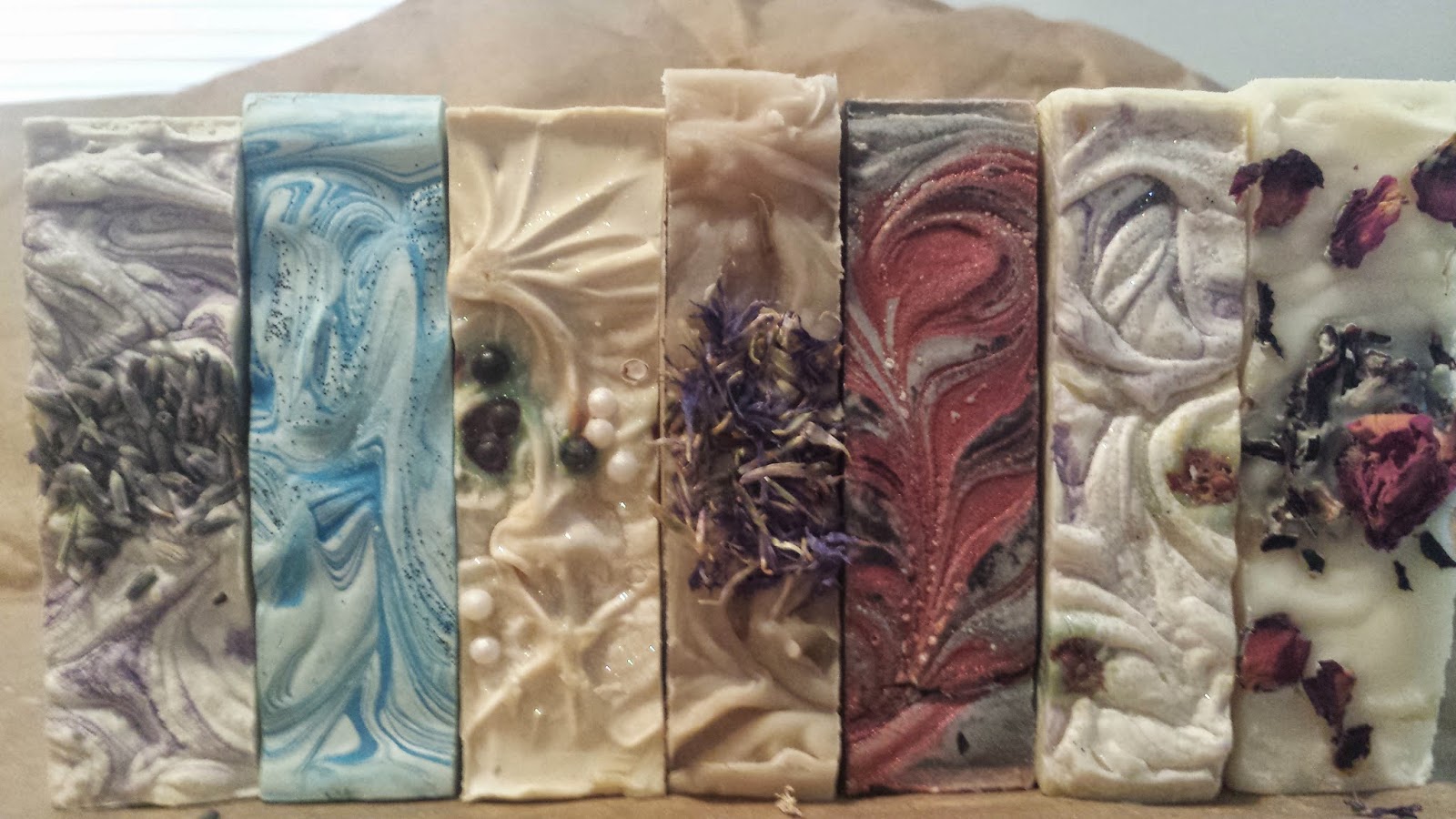 Update on Life and crazy happenings..

Man, it's been forever. Or it seems like it.

I'm such a horrible blogger, haha. At least this little break wasn't like the LAST hiatus I had! So to give you guys an update on my current standing...

2. I have a slight break between jobs which will mean MOAR SOAP!

3. I DO have some soaps I've made since the Warm Vanilla Sugar batch, but I still need to photograph them. Namely, I made a batch of Lavender, I resupplied a client with her custom order of my new Energize blend (Lemongrass, bergamot, and listea), and another custom order soap from coworkers, a Lemongrass Mint!

4. I have so many plans for new soaps! I have an order shipping in from Mad Oils (so excited! They're fabulous; find them here)

5. I keep my Facebook more up to date than my blog (sometimes), so if you ladies/gents want, you can follow my page here.

6. So outside of my move form SC to WA, the reason we have been so busy lately is we moved from Bremerton WA to Tacoma WA to be closer to Jay's job, get better pricing on rent, and really just get out of Kidnap County --- oh I'm sorry, I meant Kitsap. :)

7. Sadness for the move, though, because I could not bring my lovely furbabies with me.. They are now happy in another home, and my heart is heavier for it.


8. Furbabies that we COULD have, however, included rats! Working with a lovely lady out of West Seattle through Craigslist, I was able to relocate three amazingly cute baby boys!

From left to right: Larry, Moe, and Curly

I'm sure they will find ways to help me during my soapy excavations. :)

9. So my new job will be work from home, same sort of stuff I did at the call center just different client. And with the advantage of saving 300+/mo on gas and toll costs, it will allow me to focus on my soaping in my free time!


Once again, I apologize for being so busy, but we can all see HOW busy its gotten! Once I get my next batch of soap out, I will post a soapy update!

I would like to think I've been a busy, busy bee over the last few weeks.

I did, however, make a new batch of delicious smelling soap. Warm vanilla sugar. This was actually a request from a coworker, whose face lit up when I brought her a few bars when she was in the hospital for surgery last week.


I'll be working on some more batches soon enough -- right now I'm focusing on saving money for our next move, plus a week long trip to Cali for my boyfriend's cousin's wedding. Woohoo!
Posted by Unknown at 3:39 PM 3 comments:

Hiatus Over! Cherry blossoms, Rain, and Chamomile to soothe the soul..

I am so excited with everything that has been going on in my life. I know, I know, it's been nearly a year since I posted, but guys -- man, have I got some catching up to do!

Instead of the BMW hire I had been hoping to get, I started working at ZF Transmissions in Gray Court, SC. It was a plant job, and I was doing some German translation, which was super cool, but my shifts were 12-hours every single day of the week. No days off, nothing. I made one whole batch of soap for a coworker for a Christmas gift to his family the entire time I worked there.

After Christmas, I started speaking to a long time friend of mine -- I've known this boy for about 13 years now, we've known each other since we were kids. I really wanted a fresh start, to just move out of the state that seemed to harbor all my troubles. After lots of consulting with friends and coworkers, I decided it was the best move for me. My friend, Jay, lived in Washington state, so it was a daunting prospect. Slowly, between December and January 12, I began giving away/donating my stuff to friends or Goodwill, shipping out necessary items, or giving things to people for safekeeping. I flew out January 12, leaving my car to my uncle and signing it over to him. I landed January 13, with barely anything to my name aside from the stuff I was waiting to arrive and a lot less baggage.

Some people call it running away. I just saw it as a chance to start over.

I got a job in a call center not far from home (it was about a 35 minute walk) to make money while i slowly built up my soapmaking stash again. One of my friends from SC is actually moving up here with me this summer, and he plans on driving the trip, so he'll be bringing some of the stash I left in SC for safekeeping with a friend. On top of the job, I've also acquired a new car! (New to me, of course. I'm broke!)

The move wasn't easy, BUT -- I am here to show you how amazing my life has gotten! With some amazing soaps tied in.

I know I've said it before, I dont usually post personal stuff on here, but I feel like my old loyal readers (Jenny! <3) would like to know why I dropped off to nowhere. I'm here to tell you it was every bit as worth it as it was needed.

First of all, Jay and I have started dating. He was my childhood crush, which we touched on at the time when we were kids, but he was incredibly loyal and was already seeing someone. So I moved on, and we sort of inadvertently kept chasing each other for nearly 14 years. With me starting over and actually living where he is, I figured I would go with the advice my dad always gave me: your soulmate is usually your best friend, and you never even realize it. He married his best friend 23 years ago, and they are still every bit as in love as when they started. So here we are, taking a chance for us for once.

I also picked up snowboarding, and ATVing. Which are both as dangerous and crazy as they sound. I can't tell you how many weekends I've spend barreling down the aide of a mountain while cartwheeling, the affectionate term Jay uses for my wipe-outs, considering I tend to fall hand over heels the whole way down.

So with Washington, the first few soaps I made sort of resembled the new change in direction. First, I made a cherry blossom scented soap, with my usual recipe, using the Brambleberry FO (shipping is so much better when you live pretty darn close to it!)

I used the normal recipe with the FO, and then I did a mica oil swirl on top. Inside, I used charcoal for black and a red mica from The Conservatorie to really make it pop, and did a simple swirl inside. 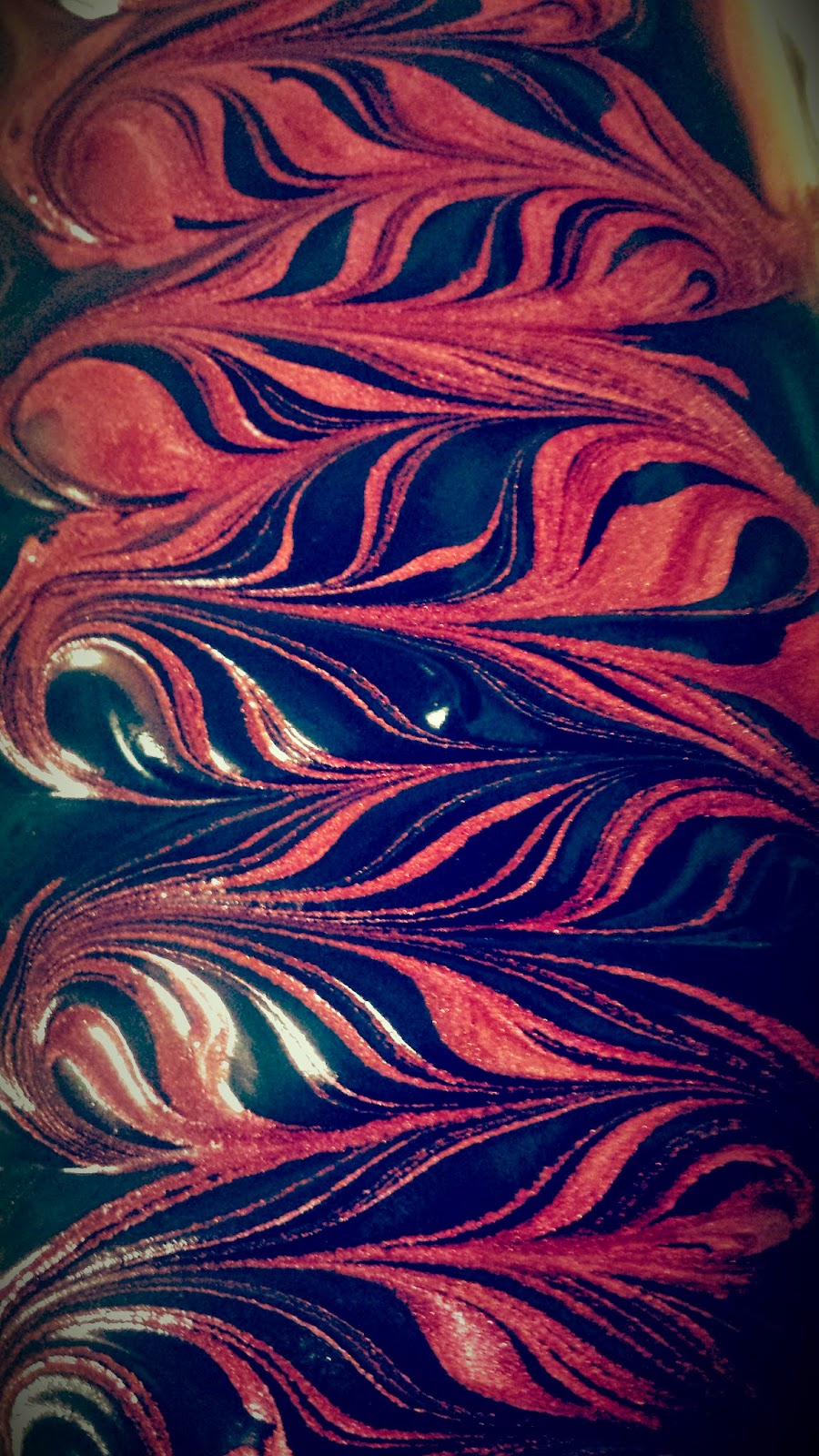 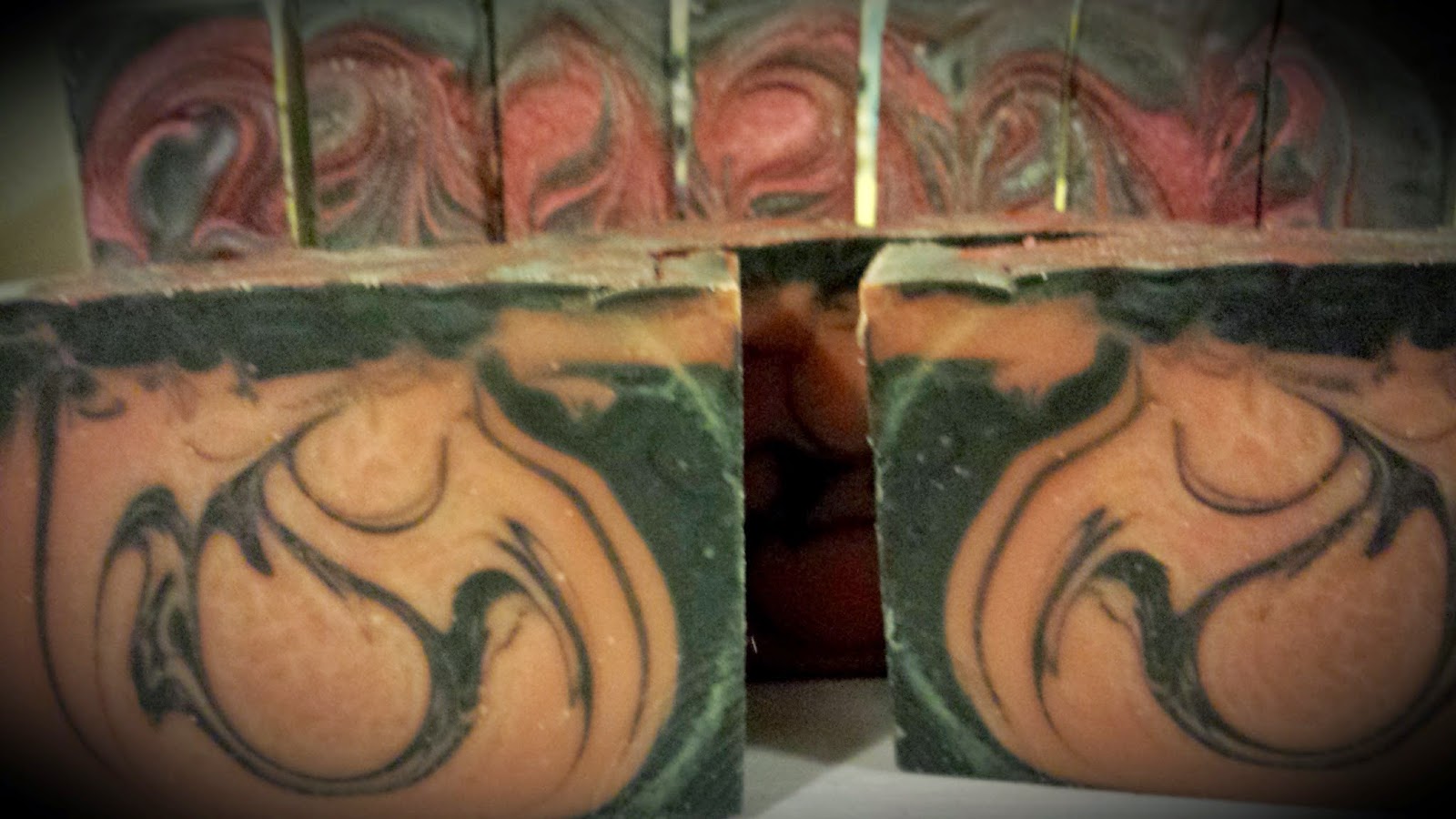 Next, I main a soap using BB's Rain type FO. Appropriate, for the mists that seem to plague WA weather. 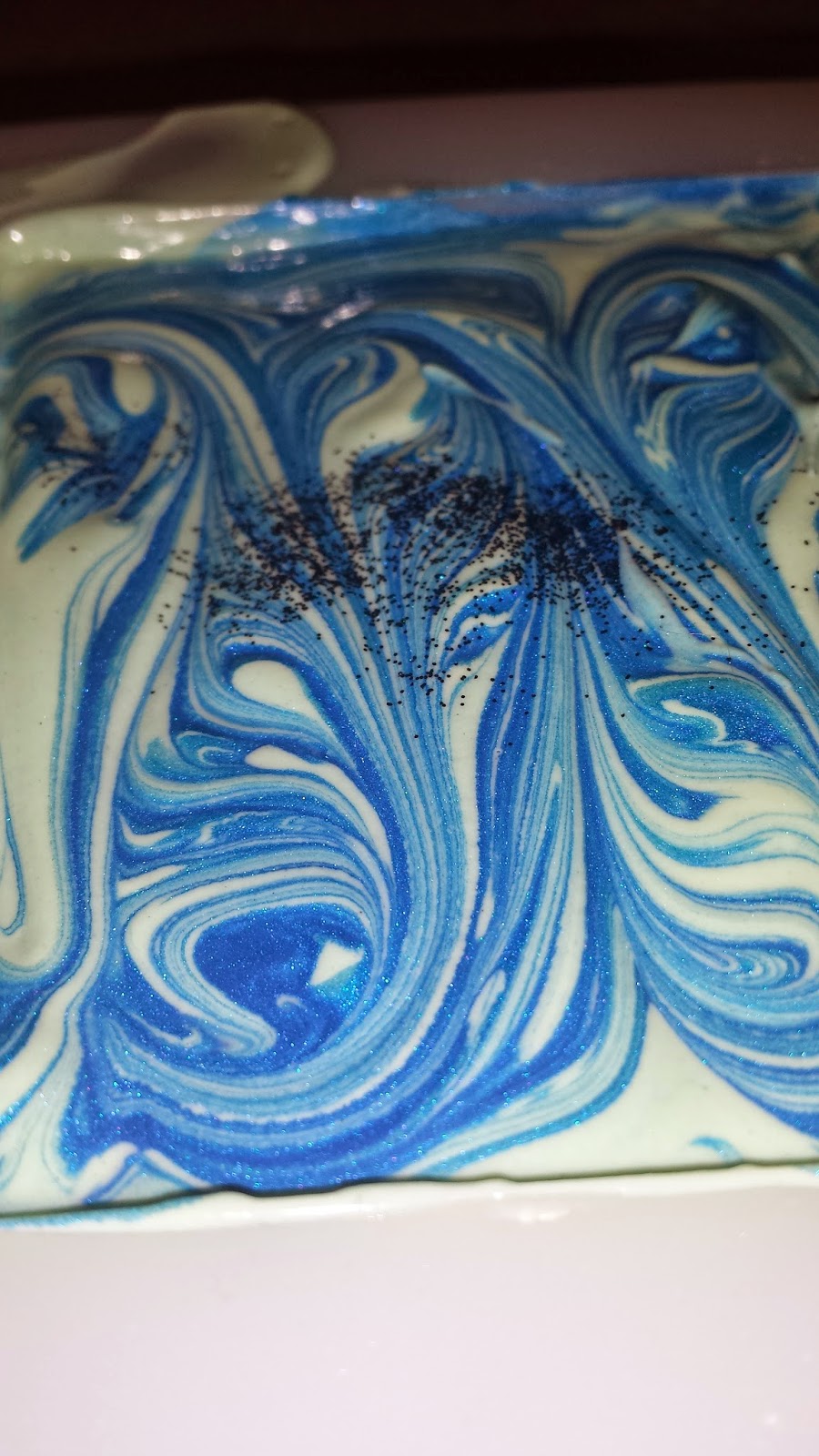 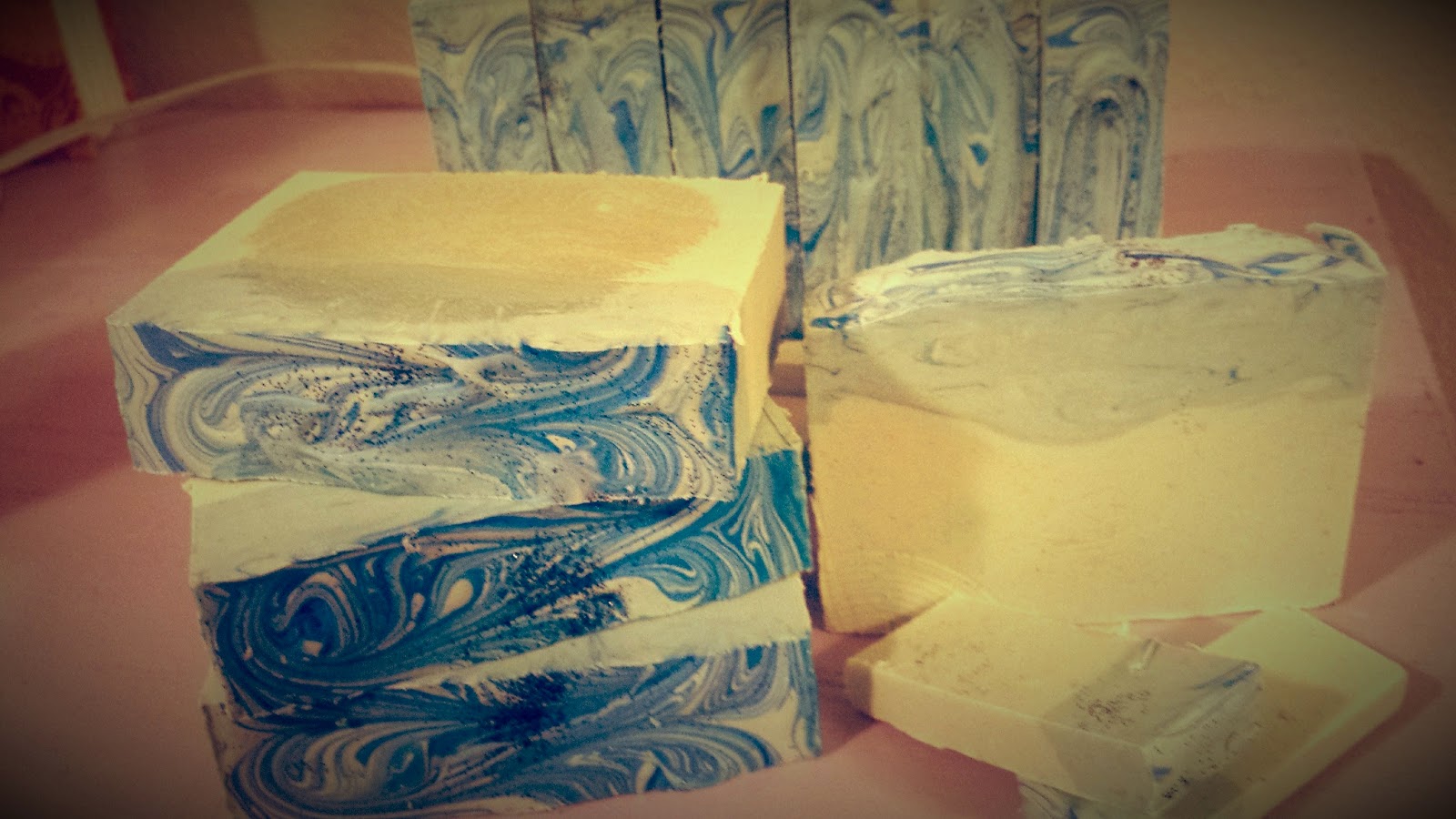 This one I did TD on the bottom and a blue swirl on top, also with mica oil swirls. I got on a kick, what can I say?

I also made a Lavender Chamomile Huggies type, which I absolutely LOVE LOVE LOVE. 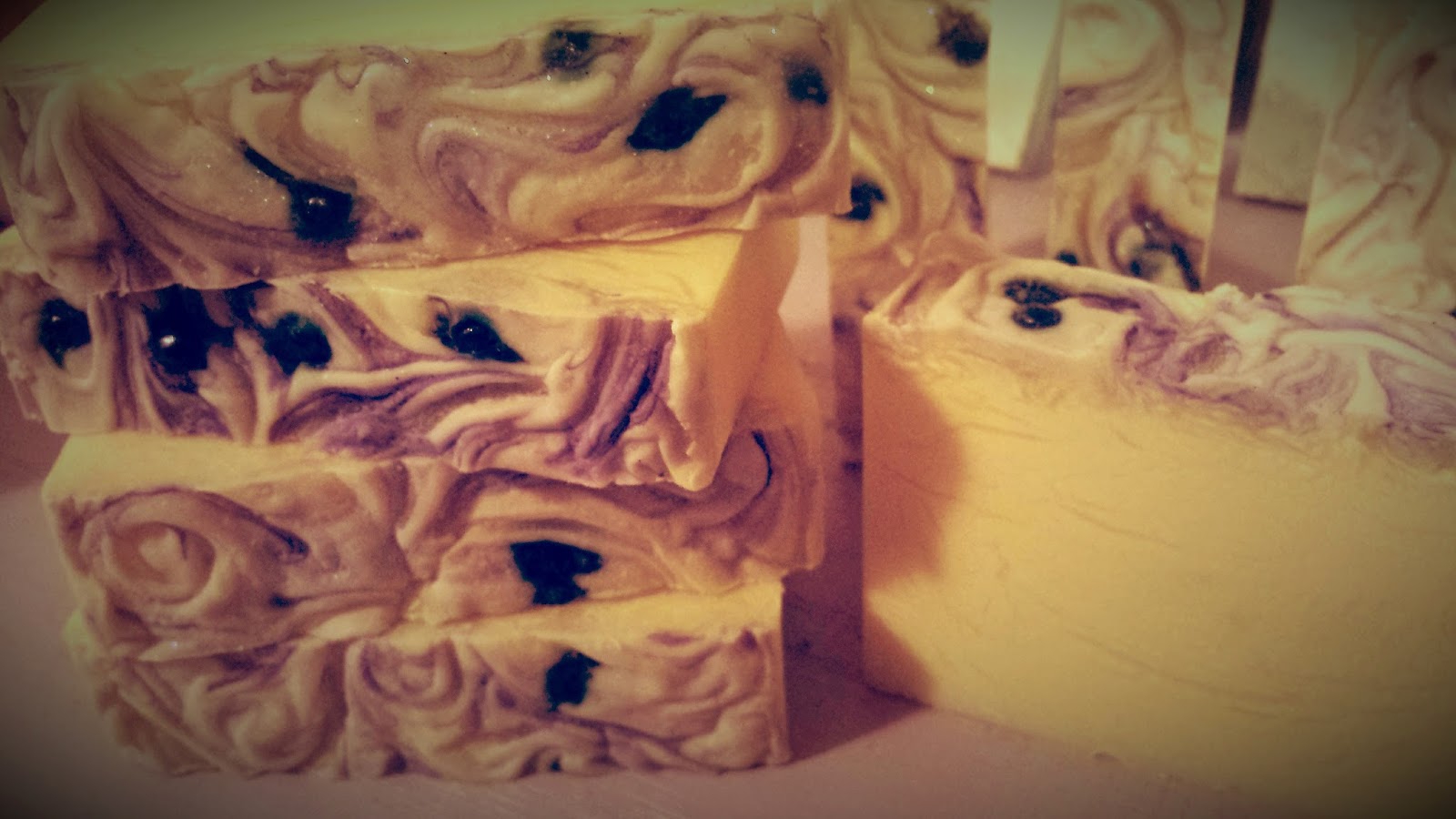 It was lightened using TD, mica oil swirl on top of purple, with little sugar pearls on top as well. I learned not to CPOP those like I usually do though -- sugar pearls turn into black blobs when baked. :(

I appreciate all of you for following my blog and being interested in where this crazy journey takes me. My next soaps are going to be an Amber soap, a new Lavender, and Warm Vanilla Sugar! Stay tuned~
Posted by Unknown at 12:52 PM 12 comments:

I dont usually post personal things on here, as this is the place for my soapy sensations, but lately a lot of stuff has happened. For those of you who have noticed the absence, I'm drifting from place to place around my hometown to stay with whoever I can, and hopefully in the next few weeks I will begin working for the BMW plant 30 minutes away. My goal is by September or October to have my own apartment, and then I will begin full production of soaps again. I will likely work the night shift, which is fine with me, but with things happening the way they are there isnt much time left for soaping.

I did, however, make more of my man-bar, Rustic for Men, last week. Here it is, all wet and in the mold! 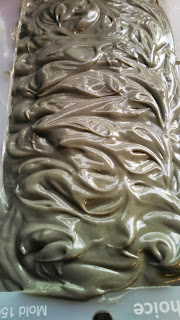 In college, I had been an aspiring BFA with a Drawing concentration, however, the expense of the art major soon daunted my independent student budget. I was working several jobs just to keep up my education, and eventually switched to German.
Yearning for any kind of creative outlet, I started making soap from scratch in our small apartment kitchen, what feels like forever ago. Soon, it was much more than a hobby.
Friends began requesting soaps, and at first I was selling them faster than I could make them. My simple soaps became intricate, and I dared to try new things.
Continually determined to turn this into my day job, I make several batches of soap a week, always experimenting with new techniques, scents, and oils. I have even started taking custom orders.
My dad always encouraged me to follow my dreams, no matter how daunting. Unique Useables is my dream, and I spend every waking moment brainstorming new scent combinations, new recipes, and new soap.
This blog details all of these experiences, sharing them with stranger and fellow soapmaker alike, in order to help spread the goodness of handmade soap around the world. :)